I feel like we’re apologizing all the time for abandoning the blog. Again we haven’t written in a while. Not only is Tiia’s laptop broken and she can’t edit pictures, I also had to install mine completely new  and some of the already edited pictures are gone. Still it won’t make much longer and we should really get at least one new one.

A lot has changed in the past months. A few weeks after we moved to Lüneburg I already found work in a lovely café. Now the summer is over but the October is starting with beautiful weather and 15°C. Perfect weather to enjoy some vegan treats!

The whole October Lüneburg is part of the event “Lüneburg is(s)t vegan” which means “Lüneburg is/eats vegan”. Tiia and I are also taking part, so today I want to post a recipe for a chocolate brownie that is also gluten-free. 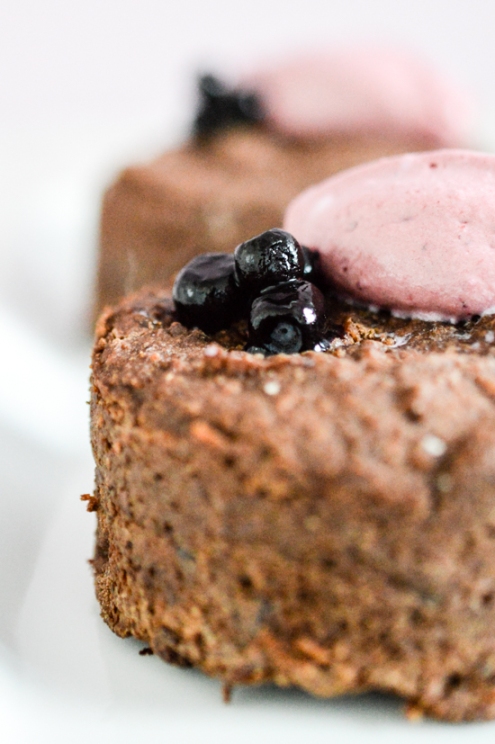 These brownies are perfect for everybody who can’t eat gluten, sugar, dairy or eggs. They are completely made without any flour and to make them a bit sweet, dates are thrown into the mix. The recipe also doesn’t use any commercial butter or margarine – instead I made some from desiccated coconut.

The delicious brownie recipe is adapted from this blog. The original isn’t vegan and I actually tried half of the recipe using eggs but I didn’t really like the result. The brownies with egg weren’t really brownies but more like a fluffy chocolate cake and that wasn’t what I was looking for at that moment. With using flax eggs as a substitute the brownies turned out perfectly moist!

If you want to you can decorate the brownies with a vegan whipped cream or a berry mousse. I used some vegan whipping cream made from oats and added some blueberries.

Preheat the oven to 175°C and grease your tin or baking pan with coconut oil. I used cake rings for the brownies which made them quite big. You can also use a small springform or a square baking tin and cut the brownies a bit smaller later.

Once you have coconut butter you can add the dates and blend until everything is smooth. Then add the flax eggs, chocolate, cacao powder, soda and a bit of sea salt and blend together. Incorporate the cacao nibs without grinding them. Transfer everything into the baking tin and smooth the top out with a silicone spatula. Bake for around 17 minutes. It might take a bit longer if you don’t use individual cake rings like I did! Let the brownies cool down completely before decorating.

For the blueberry whipped cream I first strained the thawed blueberries (you can also use fresh ones) through a fine sieve and whipped up my vegan oat cream with the blueberry juice. I formed little clouds between two teaspoons but you can just serve the cream in a bowl with the brownies or pipe it on top of the individual pieces. Enjoy! 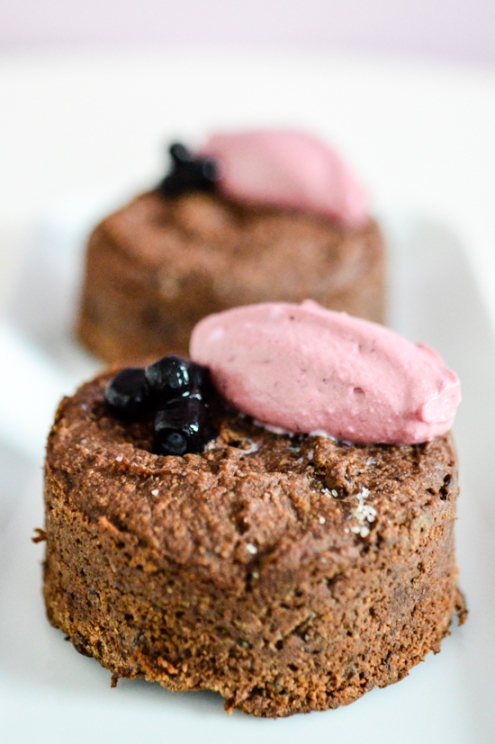 My experiments to veganize recipes continue. At the moment I am trying to make vegan macarons so a substitute for egg foam is needed. Apparently you can use no-egg but I didn’t want to buy something ready made for it.

A while ago on Pinterest I saw some vegan meringues made from flaxseed gel so I wanted to use that method to make macarons. My first attempt didn’t turn out perfectly, so I’ll give it another try later. With no more almonds in the house and more flax seed gel I decided to make coconut macaroons instead.

This recipe is really simple and good for people with food restrictions since it doesn’t include refined sugars, nuts, dairy products and is also gluten-free. If you are on a low FODMAP diet you can eat around 18 g of shredded coconut according to the app provided my Monash University. Depending on the size of your macaroons that would mean 2-3 pieces.

But first let me explain how I got whipped “egg foam” from flaxseeds: you basically don’t have to do anything else than boil flaxseeds with water, strain them and beat the cooled down flax gel into a fluffy and shiny white egg foam!

I have to admit that I had my doubts. The gel that you get from the flaxseeds doesn’t look that appetizing, but then again egg whites don’t really either, but it works! The only problem is that it is not as stable as beaten egg whites once you try to bake it (it can’t be baked higher than 100°C). On the good side, the beaten flax foam doesn’t collapse like egg foam might, so you don’t have to be super careful while incorporating other ingredients into the flax fluff. I haven’t made simple meringues yet but at least for the macaroons I can say that they didn’t taste any different than macaroons made with egg.

Mix everything in a saucepan and bring to a boil on medium heat. Turn the stove down to low-medium heat and let it simmer for around 20-30 minutes. To get the gel, strain the liquid out of the seeds by sifting through a fine sieve into a bowl. It will more gel like once it has cooled down. I recommend making the gel the day before. When I made it first, the foam got way firmer the second day! 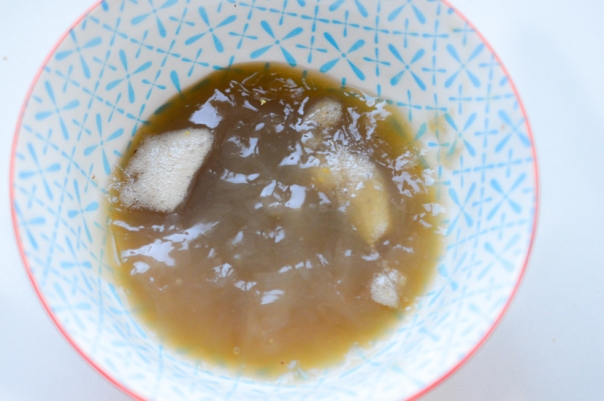 Preheat the oven to 100°C and line a tray with parchment paper.

Beat the flax gel around 5 minutes using a hand mixer until it’s fluffy and firm just like beaten egg whites.

Add the syrup and the coconut using a silicone spatula to incorporate everything. You can then either pipe the macaroons onto the tray, form little balls or drop the macaroons with a spoon onto the tray. I molded them between two tablespoons. Bake them for 1h 15m until they get lightly golden. They will be still soft, so let them cool down completely.

Melt the chocolate in a hot water bath. When the macaroons are completely cold, dip them into the melted chocolate and put on a baking paper to dry. Store in the fridge until serving. Enjoy!